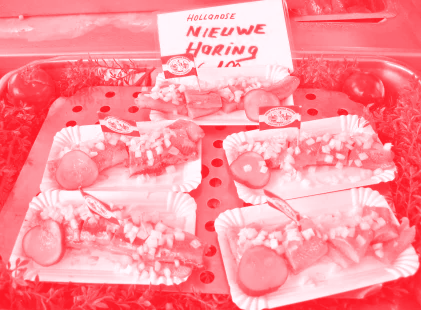 After waking up in my room at 1:00 PM (s/o black-out curtains) and lounging about for a few hours in a semi-sick daze, I decided to shave and head into the city center. I bumped into Mara and Celine on my way out of Café Jansen – Hotel Jansen’s appropriately chic restaurant. Mara and Celine are two of the staff here who help to run both Hotel Jansen & Café Jansen; we’ve become fast friends since I moved in this August.

I found a seat and we got chatting for a good twenty minutes, discussing life and my upcoming trip to the Hague. Mara told me that she’s from Dusseldorf and that she’d bring me back some of that famous mustard next time she goes home! Celine made me my favorite coffee drink: a homemade chai latte with a shot of espresso (sometimes three). With this was out the door and on my bike. I found myself in the Pijp within a quick 15-minute ride – I love how accessible this city is. I parked my bike on a random street corner at one end of the Albert Cuyp market. Not looking for anything in particular, I strolled down the market street. Strolling is hard for me as I’m normally a fast walker with places to be, but I thought back to how my ex Rose would tell me to take my time; I moved leisurely.

The market street is surprisingly quiet for a Friday. I study the market’s offerings – Dutch herring (x2), stroopwafel stands (x3), shitty tourist nick-nacks (x10), fruit stands (x5) and a whole bunch of stalls selling everything from fresh oysters to crap found in a garage.

I ducked out of the market and struck down a side street, eying the Herring shops with intrigue and just a little suspicion. The herring doesn’t look as fun as it did on the foodie shows I watched, despite my gung-ho attitude to try it. I’ll try it eventually and get someone to film. It seems fried foods are also a staple of Dutch culture. I spotted croquettes, bitterballen, fried fish, fried mussel and fried shrimp. The mussels are good, so perhaps I’ll go back there later!

I ended up stopped at a cafe called “Trucillo’ – an Italian-inspired espresso joint. I ordered a Doppio for 2.50 Euro for which I paid with a fiver and got coins in return – 2 euro and a 50-cent coin. I still can’t get over paying for real things with coins – It’s kind of antiquated and novel; just doesn’t feel like real money!

That being said, it does make me feel like I’m truly in a new place, with a different culture, which is really, really great. I’ll spend my coins on fried food, or a beer, or some raw herrings.

I’ve been enjoying my stay at Hotel Jansen a lot so far! The staff are super lovely and everyone living here is very friendly. The kitchens are clean and the location is very accessible.

Such A Cool Place

Hotel Jansen is an amazing experience. I found so many friends here, I recommend it to everyone!

Hotel Jansen is not only a welcoming and well located place in Amsterdam, it is also a community of friends. With students and workers from all over the world, this international atmosphere makes everyone feel at home. I really enjoy being here and I recommend to all newcomers this great experience.

Staying here now for 2 months and will definitely extend as long as possible. Great place full of amazing people. The location is perfect for walks in nature and not too far from the city centre. They also serve great food in the restaurant downstairs, I haven’t cooked once. Highly recommended.

I’m staying here now for three months and so far I had a really good time! I made some amazing friends and the rooms are also really nice. The restaurant downstairs has really good food and coffee and the staff is super friendly. I really enjoy my stay here and can just recommend this place!

Welcome to the first episode of Fiction Factory Fr

Hi all, We're proud to announce we will be openi

Hi all, I'm the new hotel Jansen logo on the rig

Hi all, I'm the new hotel Jansen logo on the lef

Cheers to the weekend! O shit it's Monday 😔 #h

Not everybody can handle chopsticks #hoteljansen

May your coffee be strong and your monday be short